When someone told me about beanstalkd, the seed of an idea was planted in my mind. I had some free time on my hands and decided that I wanted to implement it in Clojure to learn a thing or two. The simplicity of the beanstalkd protocol appealed to me, and it seemed like something I could implement. In addition to this, a preview build of Project Loom was made available, and I wanted an opportunity to try out virtual threads. Over two months, this germ of an idea sprouted into the 2400 line sapling it is today. I referred only to the beanstalkd protocol, and didn’t read any of the beanstalkd code. Here’s how it works:

A job is a description of some task to be done. In beanstalkd, jobs are binary blobs. For simplicity, jobs are strings in small-stalk.

Here's how jobs are processed in a system using small-stalk: 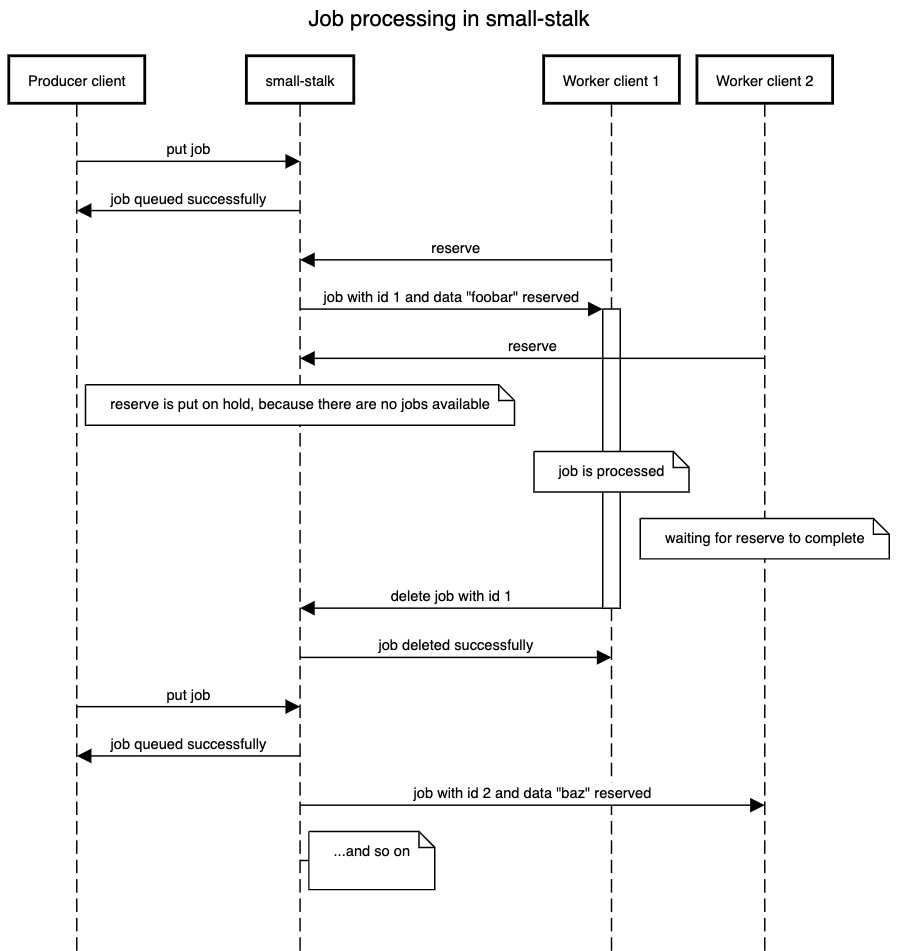 There can be two types of clients of small-stalk: producers and workers. Producers submit jobs to be executed, and workers consume and execute these jobs. Note that small-stalk itself makes no distinction between clients, and any client can run any command.

small-stalk’s acceptor thread listens on a port for incoming connections. When a connection is made, a connection thread is spawned to process commands sent by that client. The cheapness of virtual threads makes it possible to spawn a thread per connection, even if there are thousands of clients. Each connection thread reads commands, parses them and hands them off to the Queue Service for execution. The Queue Service uses the Persistence Service to persist the queue state to disk. The compactor thread regularly tells the Persistence Service to clean up data files on disk to save space.

Virtual threads are the JVM’s answer to goroutines and Erlang processes. They can be created much more cheaply than conventional OS threads, making it possible to create a thread per connection even if there are thousands and thousands of clients. Virtual threads are not available in a stable JDK yet, and I used a preview build of the JDK in order to try them out in small-stalk.

When a client connects to small-stalk, it is assigned an ID and its socket is stored in a registry. Identifying clients is necessary for some commands like reserve and delete, since if a job is reserved, only the client that reserved a job is allowed to delete it.

The Queue Service is a combination of:

I knew that I wanted to use some kind of append-only log for persistence, since I thought this would be easier to implement than complex data structures on disk. This led me to the idea of serializing all data changes in a queue.

A mutation is a data representation of a change that must be made to the queue data structure. All mutating commands (i.e. commands that are not simple reads like peek) map to a mutation. There are also other mutations (such as ::time-to-run-expired) that are triggered by timers rather than by a connection thread.

All mutating commands made by connection threads are converted into mutations and enqueued into the mutation queue, to be later executed by a single mutation thread. This means that all state changes are serialised. While this may seem like an unnecessary performance bottleneck, it affords several benefits:

The reserve-with-timeout command offers a timeout on the reserve blocking. To implement this, a separate timer thread to cancel the reserve is launched. This thread does not mutate the state directly, but instead enqueues a special mutation indicating that the client’s timeout has expired. All state modification, including cleaning up and cancelling the reserve, is done by the mutation thread.

The time-to-reserve timeout works in a similar way. When enqueueing a job, the client can specify how long a worker should be allowed to keep a job reserved. After this timeout expires, small-stalk will automatically release the job. Again, a separate timer thread is launched when a client reserves a job. This thread enqueues a time-to-reserve-expired mutation, which is then handled by the mutation thread.

The Persistence Service is a collection of functions and data used to persist mutations processed by the Queue Service. Mutations are persisted before they are processed. The file format is a simple newline-separated list of EDN maps. Each map is a mutation. Mutations are appended to the file, one after another. This file is called an AOF (append-only file).

To prevent disk usage from getting out of hand, every so often, mutations in the AOF file are processed and replaced with a snapshot of the Queue Service’s state. This is done by the compactor thread. To facilitate this process (called checkpointing), mutations are actually split over multiple AOF files. One file can hold at most a configurable number of mutations. Once this limit is reached, a new file is created and new mutations are appended there. The compactor thread reads mutations from all but the newest file (to which mutations are currently being written), replays the mutations to build a state snapshot, then persists that snapshot to disk. Once this is done, the older AOF files are deleted.

To facilitate testing, the Persistence Service is stubbed out with a service that simply writes mutations to a string instead of the disk, and the compactor thread is not started.

Clojure offers an obscure but useful PersistentQueue data structure. However, this doesn’t support priorities. small-stalk’s Persistent Priority Queue is implemented as a map of priority numbers to PersistentQueues. Popping an element from the queue involves finding the smallest key, and popping an item from the corresponding PersistentQueue. Unless the number of different priorities grows to be very large (which is unlikely for most use cases), this is a fairly simple and efficient implementation. The map could be replaced by a sorted-map to make this even more efficient.

Separating the networking layer from the queueing system allowed me to easily unit test the Queue Service without having to send CRLF-terminated strings over a socket. Using a dependency injection framework like integrant also allowed me to construct and stub out stateful components as necessary in tests. Although I didn’t take the time to write end-to-end integration tests, those would be very helpful as well.

small-stalk is not without issues, which I haven’t had time to address yet.