According to Wikipedia: "A cooperative ("coop") or co-operative ("co-op") is an autonomous association of persons who voluntarily cooperate for their mutual social, economic, and cultural benefit." 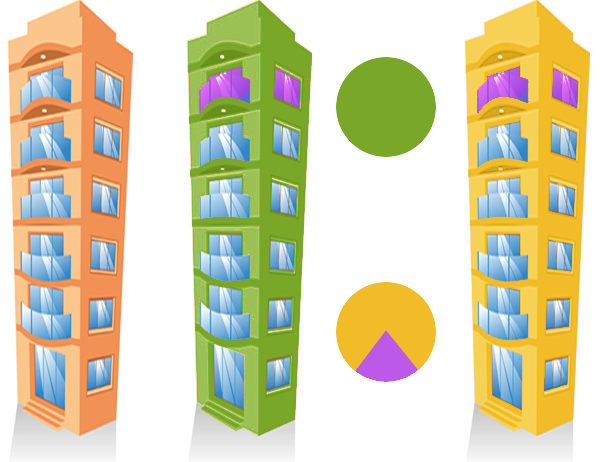 Let's use this cute, orange condo building as a conversation piece. Normally when we think of condominiums we think of the green building: it's entirely owned by a property developer (see the helpful pie chart?). Each condo is sold to an individual and that individual has no ownership or authority over the building as a whole. It's possible for the owner of an individual condo to join the condo board to deal with issues like the noisy neighbour who comes home at 3:00 AM to listen to Taylor Swift remixes. It's not possible for the condo board to prevent that noisy person from purchasing a condo unit in the first place.

The yellow building presents the alternative: each condo owner not only owns their own unit, but also a percentage of the building itself (usually 1/N, where N is the number of condo unit owners). The building is still owned by a corporation. But now, rather than some external entity, the corporation which owns the building is itself owned by the residents of the building. Here, your pink penthouse also gives you a pink slice of the overall pie.

For the purposes of our discussion, the cooperatives we're discussing are profit-seeking corporations — participants of the market economy. Let's use nilenso as a canonical example. Nilenso operates externally as any other business would: an employee in an executive capacity sign contracts with our clients, the company mails out invoices for work we've completed, the company pays rent for office space, the company collects profits. Yadda, yadda.

Internally, however, things are slightly different. Rather than "founders" owning and operating the business however they like, nilenso is owned equally by every employee and operated by an elected Executive. Our salary structure is completely transparent. As are our books. As are all of our business conversations. Large decisions (like hiring a new member -- or firing someone, if it ever came to it) require a two-thirds majority. Since everyone in the company is an owner, everyone also has agency. Want a new keyboard? Need a book? Headphones? Office furniture? Grab the company credit card and execute; there's no one here to babysit you.

To make use of more ridiculous pie charts, ownership in nilenso (and therefore, votes) looks like this: 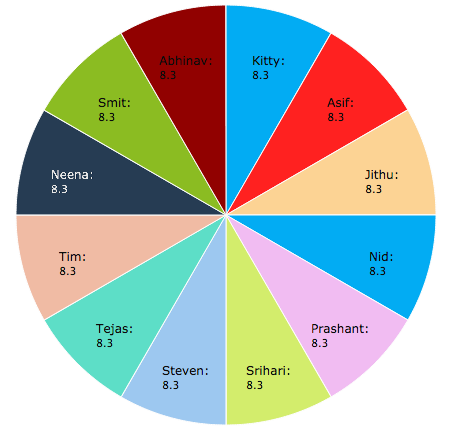 The usual idea of fun, young businesses run as employee-owned cooperatives probably conjures up images of this guy and his life partner, running their organic, fair-trade, non-GMO coffee roasterie and espresso shop: 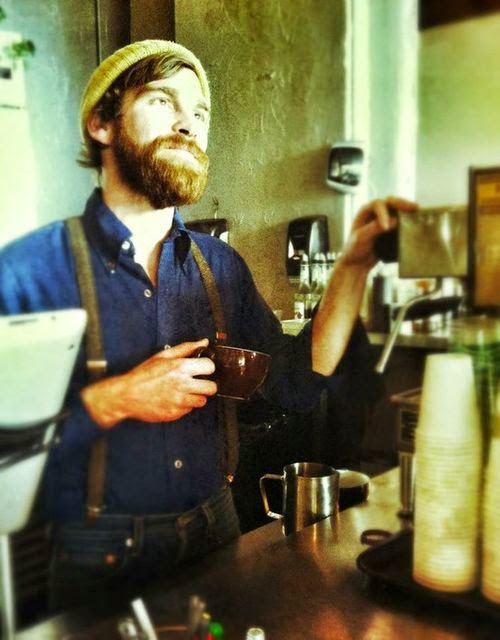 That guy looks like a he'd run a solid coffee shop. Or... lumberyard. But he probably won't grow that into a multinational corporation any day soon. Many people don't realize that big coops do exist. Larger cooperatives (like the unimaginatively-named Federated Cooperatives Ltd. of my home country) adjust their structure to handle scale: with thousands of employees, they will have a board in addition to an elected executive. They will have departments and budgets and middle managers. They will look much more like a regular corporation internally than little 12-person nilenso does. But they are still owned and operated by their employees and they are still very much cooperatives. There's nothing about a cooperative which prevents it from being pedestrian.


Why build a cooperative?

Why do we prefer to live in a democracy? We prefer a society in which governance is not military, not centralized, and not dictatorial. We prefer to have the power to fire a government (and government agents) if they aren't acting in the citizens' best interests. Well, a corporation is always governed by someone, and in a cooperative that someone is you. A cooperative is a democracy.

This capitalist democracy is not all that different from the democracy of a nationstate. An executive body is elected and maintains tenure for a predetermined period until the next election is held. Large decisions can be put to a referendum. In both cases, citizens (employees) have agency.

This also lends itself to transparency. A business led by uninformed decisions is a business doomed to fail. If the most important decisions of the business are left to the employees, the employees must have full access to information about its operation: How are salaries structured? Bonuses? What is our P&L? Who is authorizing expenses? Who is responsible for what income? Who is exceeding expectations? How?

From transparency come checks and balances. It's easy to see how an opaque, privately-owned company like Koch Industries could run so far astray of meaningful, productive, progressive business as it has. But even publicly-held companies lack serious checks and balances. Bear Stearns, Lehman Brothers, and General Motors are public financial failures. Public companies are also subject to environmental disaster, contribution to war, human rights abuses, and corruption of politics. Most people don't think of Apple or British Petroleum as inherently flawed or evil. And perhaps they aren't, yet. But when corporate checks and balances are comprised of profit motives alone, it's not impossible to imagine public companies becoming meaningless, unproductive, and retrograde societal scars, like Koch.

Transparency and a self-regulating system won't be perfect, of course. Cooperative oil companies still have refinery explosions and oil spills. An employee-owned company distributes the greed of an individual "founder" to its entire staff, rather than eliminating it. But it would take formidable collective greed for a cooperative to brush off environmental & safety issues, buy politicians, or hire an international contractor known for its human rights abuses. On the other end of the scale, the agency provided to members of a cooperative make "corporate social responsibility" a daily activity, rather than an afterthought. At nilenso, we think collectively about our office waste, how we treat our contractors, and how we interact with our local community.

Perhaps, as a software developer, you don't care about the environment. Maybe you don't care about the company's financials or the sales cycle or improving the local community. Cool. You are perfect for a cooperative. What do you care about? Good coffee? A parking space? A gym membership? Software licenses? Conferences? Coops have you covered. Join, speak up, and change the company into what you want it to be. Remember: a coop is your company, in the most literal sense. Technology companies love to proclaim "this is your company", "we want you to be your own boss", and "we want entrepreneurs". But this is all hand-waving unless it means something legally.

If running a cooperative interests you, I'd like to provide fair warning that starting and running a cooperative is not without its own set of difficulties. At nilenso, it took us months to figure out our executive structure. Prior to that, we held a lot of referendums and decisions were made slowly. Finding a structure that works for you will take time.

Your country might have similar restrictions — or you might just prefer the flexibility of starting a cooperative under another category of legal entities. Our lawyer recommended we use an LLP (Limited Liability Partnership), so our first partnership agreement looked like this: 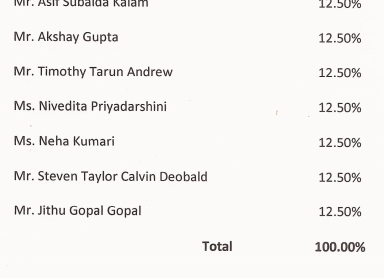 While everyone in nilenso owns (1/N)% of the company, we strive to make it a meritocracy: we have salary bands and everyone is slotted into a salary band based on her/his skills, experience, and contributions to the company. The partnership agreement doesn't affect anyone's finances, since all remuneration is through the salary structure.

Uncommon is the only other software cooperative in India that I'm aware of. They've taken another, totally valid strategy: They are structured as a Private Limited corporation. Rather than partners, every employee of Uncommon is a director and rather than a static salary structure, every employee takes home a salary corresponding to the work they've delivered that month.

Hiring and firing is one of the most difficult aspects of running any business, but it's even more difficult with a cooperative structured as a partnership. Decide procedures for employee on-boarding and exits before you start — then write them down. It's tempting to believe a team of friends will always be as happy and cohesive as they were on Day One... but it's a delusion. You are running a business and it's going to grow or fail. Either way, be ready.

Last but not least, a coop can't receive venture capital since that would mean the company was no longer owned by its employees. There are ways around this through child companies, joint ventures, and the like. But for someone like me who's not keen on the VC scene anyway, it's not really an issue. For us, this meant having enough cash in the bank to get nilenso off the ground in the first place.

Over the past year, the twelve of us have decided what nilenso is: Our primary focus is building increasingly sophisticated software. This past year, we've made wonderful tools of devops automation, distributed computing, machine learning, and multi-variate testing. Our tools and skills will only get more interesting and what defines "interesting" is decided by us! As a group, our office is excited about using this toolset, particularly through open source, to enhance essential services: water, food, housing, healthcare, education, scientific exploration.

But what we're excited about goes beyond software. We've made the nilenso office a space where we want to be: We have a library packed with books and meditation cushions. We have a washing machine. We have a nap room. We get healthy, homemade food catered for lunch in environmentally-friendly tiffins. We are investing in the education of our contract staff (cleaning and security). We have a composter for food waste and we recycle everything else. We have secure bicycle and car parking. We have delicious South Indian coffee. Over the next year, we'll change this so that nilenso is the kind of company we want in 2016.

That all describes what nilenso looks like more than it describes what nilenso actually is. Nilenso started as an experiment. None of us were sure if a software cooperative made sense or if we could make it work. After a year and a half, nilenso has grown from an experiment to an idea we want to share. We encourage you to try it out, criticize it, expand on it, and tear it apart. Resilient software systems are made through flexibility and by facing unforeseen obstacles. Resilient businesses are likely to be made of the same stuff.